This month I was not able to read as much as I had hoped but still I was able to finish two very short but amazing reads namely ‘The Call of Cthulu by H.P. Lovecraft’ and ‘Guns by Stephen King’ I also read ‘The Art of Game design : A Book of lenses by Jesse Schell’ but that book is more of a bible, in that it is referred to almost every time I design a new game.

The Call of Cthulu
by H.P. Lovecraft 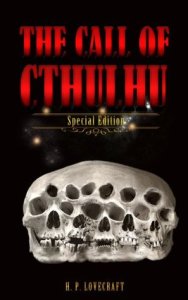 The Call of Cthulhu is a terrifying trilogy of horror stories that has influenced writers like William S. Burroughs, Ramsey Campbell, Thomas Ligotti and Stephen King.

This story highlights many of the, now famous, lovecraftian themes like pre-human civilisations, occults and secret societies, lost or forbidden knowledge, old gods and unspeakable horrors. This short 32 pages book is a must read for any fan of speculative fiction, horror or someone who just wants to know how to write a story that keeps your readers stuck on your every word from the beginning to very end.

A quick google search will give you many images of Cthulhu himself but none will terrify you to your core than the image that Lovecraft paints in your mind with his words. I literally jumped off my bed when I heard a low grumble from my neighbours apartment. This is my first Lovecraft experience and I can’t wait to read more by him. I Can’t recommend this book enough. 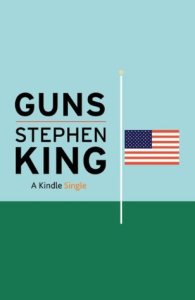 In this essay Stephen king sets down his thoughts about gun violence in America. Me not being an American slightly had difficulty to wrap my head around some of what Mr.King was talking about. I did try to research almost all the shooting incidents that were mentioned and read as much as I could about the people involved and I was already aware of the Sandy Hook tragedy. I am personally in favour of banning all guns outright but as Mr.King points out that is just not going to happen (which I don’t really understand but I also don’t mean to offend). King, who is apparently a registered owner of three handguns and have written ‘The Gunslinger‘ Series, gives his opinions and facts on America’s ‘Culture of Violence‘. He also mentions a book that he authored in his teens called ‘Rage‘ which was found in possession of multiple of these young shooters and he felt responsible to take it down, which he did. Regarding which he says,

” I didn’t pull Rage from publication because the law demanded it; I was protected under the first Amendment, and the law couldn’t demand it. I pulled it because in my judgement it might be hurting people, and that made it the responsible thing to do. Assault weapons will remain readily available to crazy people until the powerful pro-gun forces in this country decide to do a similar turnaround. They must accept responsibility, recognising that responsibility is not the same as culpability. They need to say, “We support these measures not because the law demands we support them , but because it’s the sensible thing.”

If you are concerned or even aware of the seriousness of the state of America’s gun control you must read this. Because in most cases the lives lost are regrettably of young children who didn’t even had a chance at life.